Interpretation of the Electrocardiogram in Small Animals

Interpretation of the Electrocardiogram in Small Animals 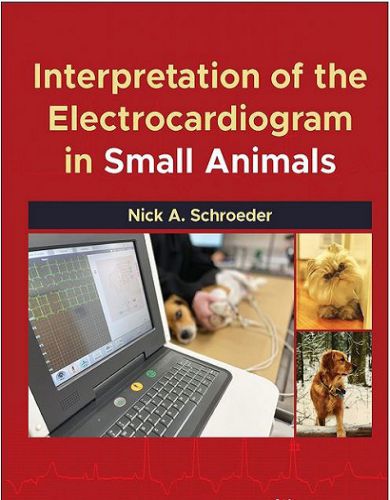 Interpretation of the Electrocardiogram in Small Animals delivers a simplified and accessible approach to electrocardiography interpretation for veterinarians treating dogs and cats. This practical manual covers a comprehensive list of arrhythmias and associated phenomena using an easy-to-follow format, with hundreds of electrocardiograms and ladder diagrams supporting the text.

The book focuses on the clinical applications of electrocardiographic interpretation, with less emphasis on physics and subcellular mechanisms, making the book a useful patient-side resource. Interpretation of the Electrocardiogram in Small Animals offers readers an up-to-date understanding and knowledge of common and rare phenomena alike. Common Clinical Presentations in Dogs and Cats by Ryane

Beginning with a description of the single cardiac cycle as illustrated by surface EKG, the book moves on to describe variations on the P-QRS-T complex that occur in response to chamber enlargement and hypertrophy. Readers will also benefit from the inclusion of:

The easiest thing is to start with the single cardiac cycle as illustrated by surface EKG. From there, it follows to explore variations in the P-QRS-T complex that occur in response to chamber enlargement and hypertrophy as well as electrolyte abnormalities and external influences such as pericardial effusion, body temperature, or neurologic status. Moving on, aberration of the P-QRS-T is discussed since it basically concerns the appearance of the single cycle.

Arrhythmias form the bulk of the discussion and sorting out where to discuss certain arrhythmias is not always so clear cut. I opted for a top to bottom, slow to fast approach to the arrhythmias. I followed up with artificial pacemakers. Inevitably, some topics overlap and it can be difficult to decide where, when, and in how much detail should a given concept be discussed. All of the tracings have been taken from real dogs and cats in a clinical setting. All of the illustrations are the work of the author.