A Field Guide to Western Reptiles and Amphibians

A Field Guide to Western Reptiles and Amphibians, This third edition covers all the species of reptiles and amphibians found in western North America. More than 650 full-color paintings and photographs show key details for making accurate identifications.

A Field Guide to Western Reptiles and Amphibians 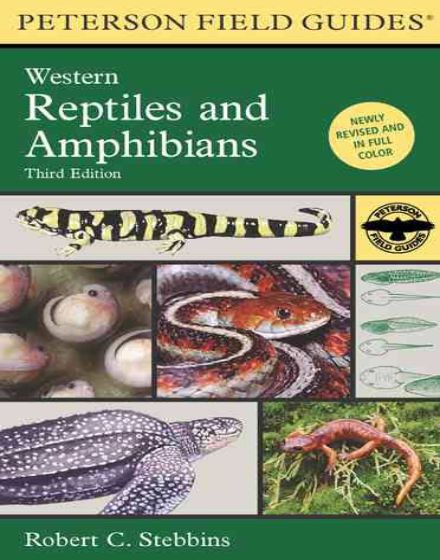 Many people are discovering the pleasures of observing amphib­ians and reptiles, and biologists are turning increasingly to these animals as subjects for scientific research. Such growing interest has greatly expanded the information available on the habits, distributions, and taxonomic relationships of our western herpeto­fauna since this Field Guide was first published in 1 966 and revised in 1985.

The present book attempts to bring things up to date. Allowances must be made, however, for the lag time between the author’s efforts and publication, along with some prob­able oversights. This new edition includes 49 species of salaman­ders (compared to 3, in the second edition), 47 species of frogs and toads (44 in the second), 1 7 species of turtles (1 6), 88 species of lizards (76), , mole lizard (amphisbaenid) (,),and 78 species of snakes (76)-a total of 280 species, 36 more than in my , 985 edition. The increase in total count results chiefly from the discovery of new species of Slender Salamanders (Batra­choseps) and recent molecular studies that have raised some sub­species to full species status.

The primary function of the book is identification. To this end, I have included information on methods of capture, for-in con­trast to birds-a reptile or amphibian often must be in hand to be identified. Captivity should be only temporary, however, and after e>,.animation the animal should be released where it was found. An attitude of “leave it alone, watch, and study” should be devel­oped. The undisturbed animal in its natural setting can provide much valuable information. Some collecting may be necessary for scientific studies and can be arranged by state and federal per­mits. Federal and state wildlife agencies’ regulations should therefore be consulted before collecting anywhere in the area covered by this guide.

A Field Guide to Hummingbirds of North America