Home » Veterinary News » Veterinary Books » Animals and the Shaping of Modern Medicine: One Health and its Histories 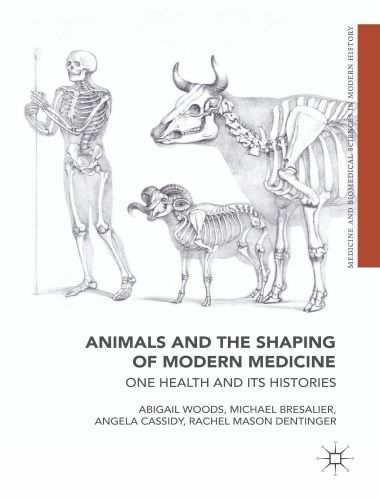 Animals and the Shaping of Modern Medicine: One Health and its Histories, This book breaks new ground by situating animals and their diseases at the very heart of modern medicine. In demonstrating their historical significance as subjects and shapers of medicine, it offers important insights into past animal lives, and reveals that what we think of as ‘human’ medicine was in fact deeply zoological.

Each chapter analyses an important episode in which animals changed and were changed by medicine. Ranging across the animal inhabitants of Britain’s zoos, sick sheep on Scottish farms, unproductive livestock in developing countries, and the tapeworms of California and Beirut, they illuminate the multi-species dimensions of modern medicine and its rich historical connections with biology, zoology, agriculture and veterinary medicine. The modern movement for One Health – whose history is also analyzed – is therefore revealed as just the latest attempt to improve health by working across species and disciplines. Principles and Practice of Phytotherapy: Modern Herbal Medicine 2nd Edition

This book will appeal to historians of animals, science and medicine, to those involved in the promotion and practice of One Health today. Both historians of medicine and advocates of One Health will benefit from its careful reconstructions of the intertwined histories of human and animal health and its incisive critiques of the conceptual and institutional borders that continue to separate them.

This is a methodologically well-grounded book, full of documentation, on one of the major shifts in animal health history through the centuries. It illustrates a rarely explored aspect of current globalization that goes beyond internationalization, and illustrates the concept of ‘globality’ in the life sciences with the logical consequence of medicine being fundamentally as unitary as life. A descriptive book that explores the development of a current phenomenon in society.

Animals and the Making of Modern Medicine demonstrates the distance that can be traveled, and the depth of connections that can be revealed, when we break through disciplinary boundaries and challenge the norms that define – and limit – our scholarly pursuits.

Euthanasia of the Companion Animal: The Impact on Pet Owners, Veterinarians, and Society