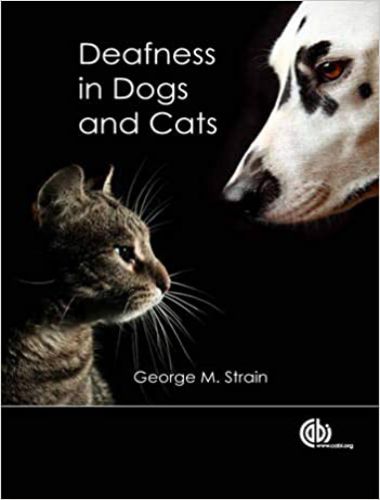 Deafness in Dogs and Cats 1st Edition, Deafness in pets is a very common problem and is increasingly being presented to veterinarians, as owners and breeders become more aware and concerned about such issues. This book provides complete coverage of the subject describing the anatomy and physiology of the auditory system, types of deafness, testing for deafness, methods of amelioration and management, behavior of deaf animals, and other issues associated with living and dealing with deaf pets.

This book would not have come about without the efforts of the countless dog and cat owners and breeders who time and again encouraged me to return to the research laboratory to determine the causes of deafness in their animals and thereby improve the lives of the many dogs and cats who have been affected by this disability.

The work presented in this book was not generated entirely by me – by a long shot – but deafness in animals has been my primary research emphasis for nearly 2 5 years. The work of others that is presented in this book is a significant part of its content. and the story would not approach completeness without their contributions. Needless to say. any errors of omission or commission in presenting that work are mine alone. Get Now: Lehninger Principles of Biochemistry PDF

When I began my studies of deafness in the early 19 80s – initially in the Dalmatian breed – deafness was mostly a briefly mentioned afterthought in veterinary medicine and veterinary neurology texts. and the number of published research studies could easily be counted.

Most of the publications were histological studies in Dalmatians or white cats from a small group of researchers. pursued from the perspective of advancing understanding of deafness in people. Today the picture is quite different. with a widespread awareness of animal deafness being present in the research community. among veterinary professionals. in the dog-breeding community. and in the overall population.

Ruminant Surgery: A Textbook of the Surgical Diseases of Cattle, Buffaloes, Camels, Sheep and Goats