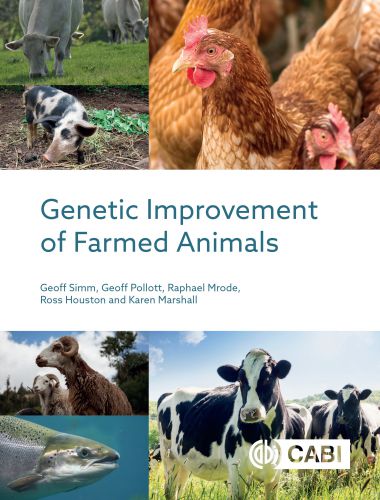 The book is based on Genetic Improvement of Cattle and Sheep by Geoff Simm, first published in 1998 by Farming Press, and the 2000 reprint with amendments, subsequently published by CABI. There have been many developments in animal genetics since then, which we describe here. We have also expanded the species coverage of the book and included applications in both developed and developing countries. Veterinary Treatment of Sheep and Goats

The first chapter in the book sets the scene for modern livestock breeding, by looking at the origins and rôles of today’s livestock breeds. The next four chapters deal with the scientific principles of livestock improvement. Chapter 2 outlines some of the basic principles in genetics and attempts to illustrate the link between genes and the performance of individual farm animals, or populations of them. In Chapter 3 the main strategies for genetic improvement are discussed. The factors which affect responses to within-breed selection, and some of the tools and technologies used, especially for more effective within-breed selection, are discussed in Chapters 4 and 5. Chapter 6 explores in more depth how we analyse variation in farm animals. Chapter 7 discusses approaches to predicting breeding values. Chapters 8 to 13 deal with the application of these principles in practical breeding programmes in dairy cattle, beef cattle, sheep and goats, poultry, pigs and aquaculture. Finally, Chapter 14 discusses some of the key societal, technical and ethical challenges facing farm animal production in general, and animal breeding and genetics in particular. It discusses how livestock breeders, scientists and others might respond to ensure wide societal and animal benefits from future breeding schemes. There is a glossary of technical terms at the end of the book. These terms are given in italics in the text when first mentioned.

The fairly wide use of statistics in modern methods of animal breeding is often off-putting to both students and practitioners. We have tried to keep the use of statistics to a minimum, but a little understanding of some of the basics goes a long way. So, some statistical methods are described, but little or no prior knowledge is assumed. New techniques from molecular biology are having a major impact in animal breeding. But, here too, there is a risk that the technology and language could widen the gulf between developer and user. We have tried to outline the current and potential applications and value of these techniques without going into too much detail on the molecular methods themselves. If parts of some chapters are too detailed, the summaries at the end of each chapter should provide enough information to allow readers to move on to the next chapter.