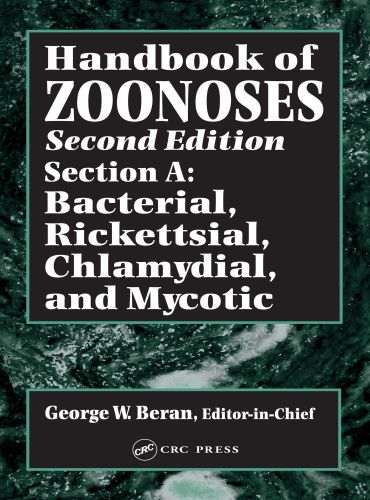 This multivolume handbook presents the most authoritative and comprehensive reference work on major zoonoses of the world.

The Handbook of Zoonoses covers most diseases communicable to humans, as well as those diseases common to both animals and humans. It identifies animal diseases that are host specific and reviews the effects of various human diseases on animals. Discussions address diseases that remain important public and animal health problems and the techniques that can control and prevent them.

The chapters are written by internationally recognized scientists in their respective areas of disease, who work or have worked extensively in the most affected areas of the world. The emphasis for each zoonosis is on the epidemiology of the disease, the clinical syndromes and carrier states in infected animals and humans, and the most current methods for diagnosis and approaches to control. Companion Animal Zoonoses PDF

For infectious agents or biologic toxins, which may be transmitted by foods of animal origin, a strong focus is placed on food safety measures. The etiologic and therapeutic aspects of each disease important to epidemiology and control are identified.

Following an introduction for each zoonosis, consideration is made of its history, etiology, epidemiology, the disease in animals, the disease in human beings, its public health aspects, and references for further study. For many of the zoonoses, reference is also made to the first edition of the Handbook Series in ‘Zoonoses, CRC Press, Boca Raton, FL, published in eight volumes, 1979 to 1983.