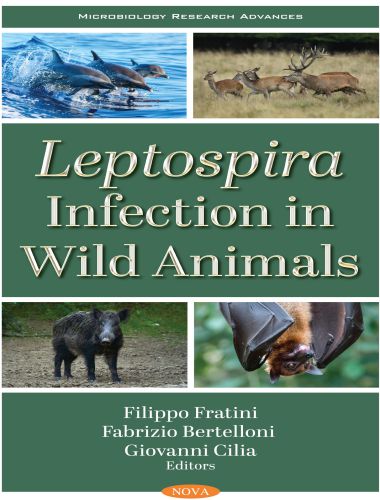 Leptospira is a Gram-negative bacterium that causes leptospirosis, one of the most important re-emerging zoonotic diseases. The disease is worldwide diffused, and animals are involved in its spreading. Among animals, wildlife play an important role in the epidemiology of leptospirosis, as reservoir of specific Leptospira serovar. Several species are known as Leptospira maintenance host, but other are less investigated and could represent a “new” host involved in its epidemiology.

The book “Leptospira Infection in Wild Animals” contains descriptions of leptospirosis epidemiology in several wild animal species, highlighting the infection in different part of world, the most detected Leptospira serovar and the risks of infection for both humans and domestic animals. Data on marine mammals, wild boar, rodent, lagomorph, wild ruminants, amphibian and reptiles, bats and non-human primates Leptospira infection were deeply analysed and discussed in order to better understand their role in the leptospirosis epidemiology.

Different reasons could try to explain this situation, similar in other world’s Country, first of all the climate changes. Somewhere, the marginalization of some areas could promote the increase of some wild animals, potential host for Leptospira, and recently new wild species become synanthropic or semi synanthropic. Furthermore, in past years grew up the number of extensive or semi-extensive farms, promoting the possibility to contact between wild and domestic animals. Restraint and Handling of Wild and Domestic Animals Free PDF Download

Traditionally, leptospirosis is considered an occupational disease and jobs that promote direct or indirect contact with animal urine were considered at high risk of acquisition, such as farmers, veterinarians, sewer workers, slaughterers and hunters. However, human activities/behaviour change in last decades and the possibility of contact between man and Leptospira grew up in consequence of the increasing of outdoor activities, especially for hobbies. Lastly, in recent years a change in Leptospira epidemiology was recorded.