Medical Entomology: A Textbook on Public Health and Veterinary Problems Caused by Arthropods

Medical Entomology: A Textbook on Public Health and Veterinary Problems Caused by Arthropods 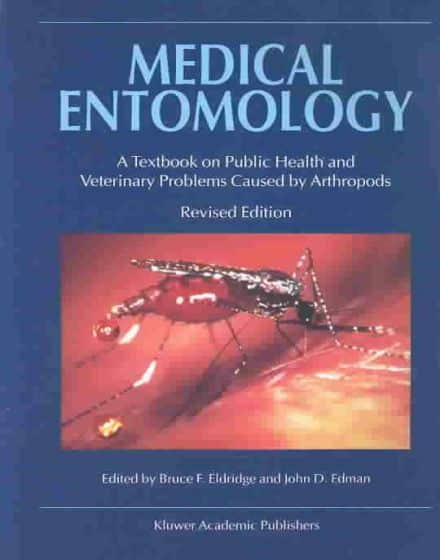 It includes general discussions of epidemiology, transmission, disease control, vector control and disease surveillance. In addition, it contains chapters oriented towards the many specific arthropod-borne diseases. Furthermore, the book discusses the many direct impacts that parasitic insects have on human and animal health. The arthropods themselves are dealt with in two introductory chapters.
At the same time old and new health problems with arthropods occur, the traditional approaches to arthropod control have become more limited. Arthropod resistance to chemical pesticides by arthropods, a diminishing interest on the part of pesticide producers to develop new products for public health and veterinary uses, and the regulatory restrictions on pesticide use worldwide forces medical entomologists to seek entirely new methods to control arthropod vectors. Medical and Veterinary Entomology 3rd Edition

The field of medical entomology has expanded in recent years to include a number of new approaches and disciplines. When the widely-used textbook of medical entomology by James and Haywood was released in 1979, molecular biology was in its infancy. There were many examples of applications of genetics to medical entomological problems, but little understanding of the expression of genes for factors such as insecticide susceptibility, vector competence, host preference and similar important phenomena. Now, a variety of new methods are available to study genes, and to genetically alter important characteristics in vectors as a potential means of controlling human and animal diseases.