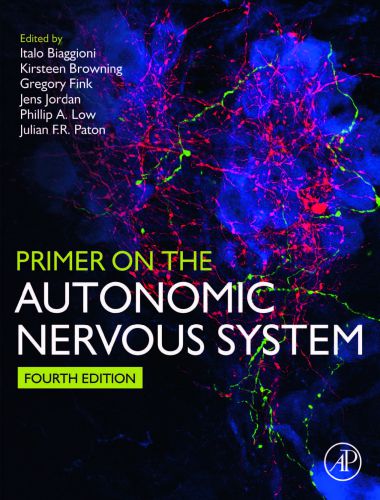 The autonomic nervous system is critical in the maintenance of homeostasis by participating in the regulation of virtually all functions of the body. Not surprising, autonomic dysfunction is implicated in the development of numerous diseases involving diverse organ systems. From its beginning, the Primer on the Autonomic Nervous System had the ambitious goal of providing a comprehensive but concise overview of autonomic physiology and pathophysiology.

Primer on the Autonomic Nervous System, Fourth Edition provides a concise and accessible overview of autonomic neuroscience for students, scientists, and clinicians. The book’s 142 chapters draw on the expertise of more than 215 basic scientists and clinicians who discuss key information on how the autonomic nervous system controls the body, particularly in response to stress. This new edition also focuses on the translational crossover between basic and clinical research. In addition to comprehensively covering all aspects of autonomic physiology and pathology, topics such as psychopharmacology decoding and modulating nerve function are also explored. King’s Applied Anatomy of  the Central Nervous System of Domestic Mammals

The Primer represents the largest collection of worldwide autonomic nervous system authorities ever assembled in one book. It is especially suitable for students, scientists, and physicians seeking key information about all aspects of autonomic physiology and pathology in one convenient source. Each of the close to 150 chapters provides the essential knowledge of the respective topic and ends with key references where readers can ﬁnd more exhaustive information, making it a convenient resource of knowledge.