The Veterinary Book for Dairy Farmers 4th Edition by Roger W. Blowey October 2016, erhaps what is particularly interesting about this fourth edition is that the major increases in our knowledge have occurred in the basic subjects of calf feeding, mastitis and lameness and hence it is in these chapters where many of the fourth edition changes have occurred. Comparing this text with the Preface to the Third Edition, I think we can now say that improvements in our knowledge have led to a decrease in disease. 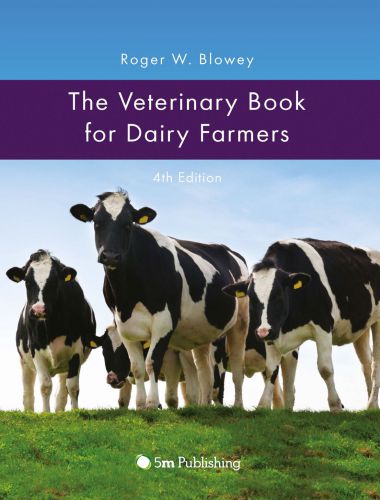 The big changes have been in farming itself. Large modern units with far more space, better ventilation, better feed access and a well-balanced diet have all contributed to decreased disease. The biggest contributor, however, has probably been the increased knowledge and skill base of those working on farms. With larger units, farms have been able to justify considerably greater expenditure on training, and as a consequence animal health has benefited.

I certainly do not agree with the concept that large units are ‘factory farming’ and therefore constitute poor animal welfare. My own opinion would be the reverse, namely that well-run large units with highly trained professional staff have the capability to provide excellent conditions for livestock and there is now published data to support this opinion. Training is key, however, and I hope that this book goes some way to assisting with that challenge.

I have again found it difficult to know where to condense material, providing sufficient information to make this book useful but at the same time not so large that it becomes economically unviable. For those requiring more detail my other books have also been updated, namely Cattle Lameness and Hoofcare, Mastitis Control in Dairy Herds and A Color Atlas of Diseases and Disorders of Cattle, and as before I have included a list of suggested further reading.

In my Preface to the Third Edition I wrote, ‘There will be no further new edition until we are well into the 21st century. By that stage BSE will be history.’ That was one prediction that I did get right. What has been disappointing, however, has been the rise of bovine TB in the UK. Who could have predicted the massive increase in incidence and geographical spread from the West Country starting in 1998? At the time of writing there is an ongoing cull of the wildlife reservoir in three small areas of the country, although this has resulted in active and occasionally violent protests from a small part of the community.