Canine and Feline Dementia : Molecular Basis, Diagnostics and Therapy. The book deeply focuses on the epidemiology, diagnostics, therapy and molecular basis of canine and feline dementia or cognitive dysfunction syndrome. 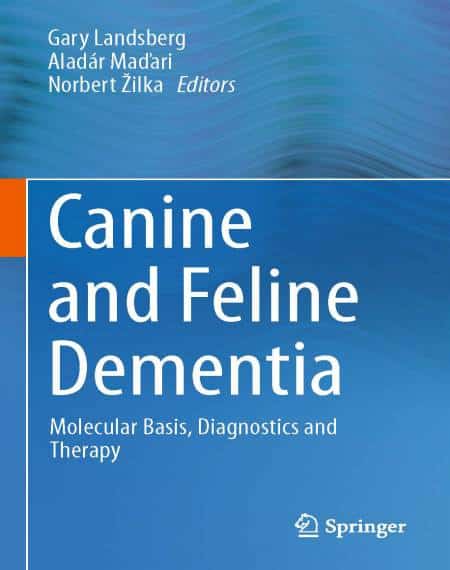 The term “dementia” is generally used to describe a decline in mental ability of human beings which is severe enough to interfere with daily functioning. Human dementia represents a group of symptoms affecting memory, thinking and social abilities of patients with a decline in cognitive function beyond what might be expected from normal ageing. The probability of suffering from dementia progressively increases with age.

The aim is to provide a broad overview of the current knowledge on canine and feline dementia. Experiences of clinicians are appropriately linked with current scientific knowledge in a readily comprehensible form. In the first three chapters we describe the clinical pictures of canine and feline dementia, discuss the medical causes of the disease and its phenotypic variability. In the 4th chapter we introduce the dog as an appropriate animal model for human Alzheimer’s disease progression.

Then we shed light on the neuropathological hallmarks of canine and feline dementia. For the first time we touch upon the modern diagnostic approaches based on the neuroproteomic technological progress. Last but not least, we address the current pharmacological and non-pharmacological approaches for therapy and risk and protective factors of feline and canine dementia. The book addresses clinicians, researchers, university teachers and graduate students in veterinary neurology and medicine.

The question whether dogs can suffer from dementia similar to human patients has been raised by clinicians and basic researchers. Are they similar or are they representing a completely different pathological entity? From this perspective, the title of the book seems to be slightly provocative. In this text, authors from a wide field of research offer readers an in-depth insight into molecular biology, epidemiology, diagnostics and therapy of the disorder, commonly referred to in pets as cognitive dysfunction syndrome, and try to define the interface between the human and canine form of dementia.

In fact, credit for much of the early studies that helped to shape our understanding of the field began with the collaboration of several research institutes studying the dog as a model for human brain ageing. The chapters by Joseph Araujo and Elizabeth Head provide us with insight into the similarities between canine brain ageing and human dementia. In both the dog and the human, the most prominent features of the disease are memory impairment, a decline in learning ability, alteration of social interactions and behavioural changes. The initial symptoms gradually worsen over time. As in human, age is the main risk factor.

Cardiology for Veterinary Technicians and Nurses