Major Fodder Crops in Pakistan 2019, Hello Animal Nutritionists, I am Dr. Kashif Amin Today I am going to share with you fodder crops of Pakistan 2019.

Fodder are greenish plants that are grown to feed  cattle, buffalo, sheep, goat, and chicken. These greenish herbaceous plants include  Corn, Sorghum, Berseem and Lucerne. 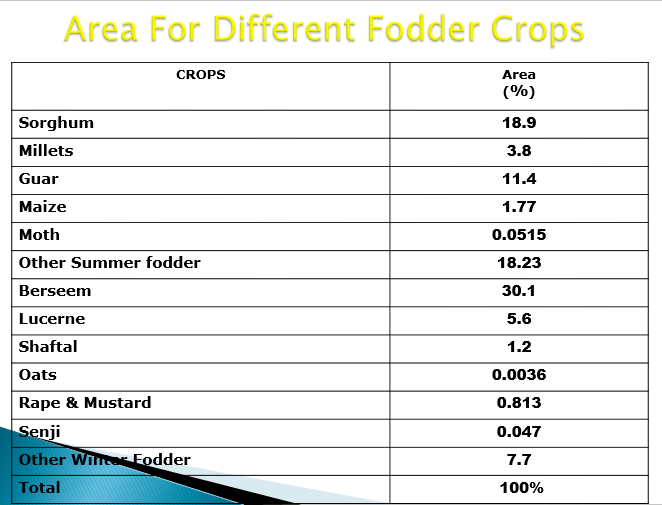 Types of fodder crops in Pakistan:

There are two types of fodder crops in Pakistan which are given below;

Berseem is a winter fodder crop, is also called King of fodders. 1.94 million hectors of Cultivation area required. Berseem is multicut fodder it means it can be cultivated multiple times, Growth stops in May & June, December & January.

Varieties of Berseem in Pakistan:

Berseem sown in September- November at the seed rate of 8-10 kilograms per acre, fodder ripe in December to May and the yield obtained is 45-54 tons per acre.

Berseem Also called as Egyptian clover, Its height maybe 80-90 cm. Cow producing 8-9 liter milk can be maintained on green berseem alone without any concentrate feeding. Temperature below 4-5 C kills the plant, Warm and humid climate is also not suitable for its growth. First cutting is taken after 60-70 days of sowing, second, third and fourth cutting after 30 days interval.

Berseem is a fast-growing, high-quality forage that is mainly cut and fed as green chopped forage It is often compared to alfalfa, due to its comparable feed value Unlike alfalfa, it has never been reported to cause bloat.

It is slightly less drought-resistant but does better on high moisture and alkaline soils. Berseem gives maximum production after winter season because rise in temperature is favorable.

Grazing is possible though less common than cutting, Berseem clover can also be used as a green manure crop. Berseem either sown alone in fields or It is mixed with grass or oats to make productive silage.

The highest yield of protein with a relatively low yield of fiber was obtained by cutting the plant at a height of about 40 cm. Five to six cuttings can be done under irrigation.

Common question asked by farmers and students regarding Berseem, Why Berseem is not used as HAY?

Berseem is not used for making hay because it has hollow stems and are succulent means water content are high which make it difficult to dry.

Oats is Winter Fodder Crop in Pakistan available & sown in Pakistan and Better yield obtained when sown with Berseem.  Oats are grown either for grain or forage, while in other regions, and particularly in developing countries, oats are first grown for forage and then allowed to recover for grain harvest.

Different varieties of oats present in Pakistan are given below;

The oat plant grows to a height of 1.2 m, It has a fibrous root system, its stems are erect, smooth, and hollow, The leaves are linear, alternate, and acuminate (tapered leaf at end).

Intercropping oats with legumes is effective for Reducing diseases, Suppressing weeds Capturing a greater share of available resources and improving the nutritive (protein) value of the crop compared to oats alone.

Cut-and-carry systems are much used by smallholder farmers in developing countries. Cut-and-carry oat forage has several advantages: there is less waste than in grazed pastures.

When oat forage is intended for hay, the level of Nitrogen fertilizer should not be too high as excess N increases stem fiber levels (ADF and NDF) and decreases water-soluble carbohydrates. Cutting at the milky dough stage is the best.

Oats are one of the main cereal forages used for silage, In European countries, oat forage is mostly used for silage and haylage. Oat yields more silage or green forage per acre than any other cereal crop, especially when fertilized with nitrogen, Oat forage intended for silage can be harvested at boot, milky dough or soft dough stage. When cut at the boot stage, oat silage has a Low Dry matter, High palatability, High energy, and High protein content. Wilting is necessary to reduce moisture and to prevent sewage during ensiling. When cut at the dough stage, oat silage has more DM and a higher energy value.

Urea, enzymes, and inoculants have been shown to improve aerobic stability. The fall in pH and lactic acid production in oat silage, which improve feed intake and milk production.

Oats sown in September- December at the seed rate of 25 kilograms per acre, fodder ripe in December to April and the yield obtained is 34 tons per acre.

Cattle can be maintained in good condition as many cultivars provide good forage if cut at flowering or soon after it. Maximum green fodder, dry matter yields, and crude protein contents were recorded when oats were harvested at a 50 percent flowering stage.

Lucerne is the Major winter fodder crop of Pakistan, it is also called Queen of fodders. Lucerne is a Perennial fodder Less affected by hot & cold weather as compared to berseem. Lucerne is a Multicut fodder.

Varieties of Lucerne in Pakistan:

Lucerne sown in October-November at the seed rate of 6-8 kilograms per acre and the yield obtained is 60-70 tons per acre.

Due to its high nutritional quality, High yields, High adaptability, Alfalfa is one of the most important legume forages of the world. A major source of protein for livestock. Basic component in rations for dairy cattle, beef cattle, horses, sheep, goats and other classes of domestic animals.

It is cultivated in more than 80 countries. Alfalfa has a deep root that reaches down to 4 m but can reach 7-9 m in well-drained soils. Its stems are erect up to 1 m high, glabrous or hairy in the upper parts. Leaves are trifoliate, 10-45 mm long and 3-10 mm broad.

It can be used as fresh fodder or haymaking, Best of all hay is made from this fodder. Alfalfa may be cut several times a year (up to 12 in warm regions). The best stage for cutting is at 25-50% flowering as the nutritive value drops after that.

The cutting height is important, and to avoid damage to the plant, 5-10 cm stubble should be left. This will help to ensure good regrowth. Best quality hay is obtained when cutting is done during a dry period so that the swathe dries quickly. Baling should be done at 82% DM. These conditions are generally satisfied in small-scale farms.

Alfalfa is an N-fixing legume and does not require added N fertilizer, Its roots improve soil texture and its leaves add organic matter to the soil, It increases the yield of succeeding crops.

Also called as alfalfa. Valuable leguminous fodder and hay crop for dry and irrigated areas of the word. Rich in protein, calcium and other minerals, Can tolerate extreme hot and cold temperature, Lucerne performs better during cooler dried than humid wet season.

First cutting is taken after 9-10 weeks from sowing, In cold winter season cutting may be taken 40-45 days interval. In summer at 20 days interval, With advancing maturity reduction in digestibility and voluntary intake. Leafiness decreases resulting in higher CF and less crude protein. On average 7-8 cuts can be taken through the year.

Millet is a major summer fodder crop of Pakistan Important in the arid zone.

First cutting should be done after 50-80 days after sowing and subsequent cutting after 35-40 days, For good regrowth cutting height should be 15 cm from the ground. It is a maintenance type of fodder, The fodder may contain 1.19-2.16% oxalates. Fodder Crops in Pakistan 2019.

Sorghum is a major summer fodder crop of Pakistan Important in the arid zone.

Most important grain and fodder crops for low rainfall areas, Crops can be grown over a wide range of climatic and soil conditions. It can withstand heat and drought and also tolerate waterlogging for short period. It can give 2-3 or even 4 cuts, Some verities may be tall as 4-5 meters. Leaves are generally waxy, possess saw-like teeth on their margins and are smaller than maize.

It can be cultivated along with leguminous crops such as with guar or cowpea, This fodder is suitable for silage making next to maize. It is a maintenance type of fodder.

Delay in harvesting results in a sharp decline in CP and digestibility if nutrients and increase crude fiber. During the time of harvesting, stems should be soft and tender and not hard and woody. The first cut should be taken after 2 months of sowing and subsequent cuts at an interval of 35-40 days. Crop should not be allowed to mature beyond the 50% flowering stage.

Very popular among farmers due to dual-purpose use as grains and fodder. Plant height varies from 1.5 to 6.0 meters. Leaf-blades are 30-150cm long 5-15 cm wide. The green part left after the removal of cobs is used for the forage source. It requires a warm and humid climate and well-drained soil.

Maize should be harvested at the silk stage which is ideal for harvesting more nutrients. The yield depends upon the stage of harvest variety and management. It can support 3-4 kg of milk production above maintenance. Fodder can be conserved in the form of silage, for this it should be harvested at the milk stage due to lower moisture and higher soluble carbohydrates. It can be cultivated with cowpea.

maize sown in March-September at the seed rate of 16-20 kilograms per acre and the fodder obtained in June-December and yield obtained is 20-25 tons per acre.

Sugarcane tops are one of the main by-products of sugarcane milling, At harvest time, the sugarcane biomass includes green leaves, dead and dying leaves and variable amounts of immature cane. Sugarcane tops represent 15 to 25% of the aerial part of the plant. Generally, the cutting point is at the highest fully-formed node

5 tons of dry matter (DM) per hectare is the availability of SCT. SCT can be preserved in the form of silage by adding molasses and urea (4-5% DM basis).

That prevents optimal crystallization and cause undesirable color in sugar. For that reason, they are the first by-product of the sugar milling process and are discarded on the field.

Due to the undesirable color in sugar.

Cowpea sown in March-September at the seed rate of 12 kilograms per acre and the fodder obtained in June-December and yield obtained is 17.34 tons per acre.

The cop is ready for harvesting from flowering to pod initiating stage in about 70-80 days from sowing. It should not be allowed for mature, as it is would become woody and fibrous resulting in loss of digestible nutrients and palatability.

maize sown in April-July at the seed rate of 16-20 kilograms per acre and the fodder obtained in June-December and yield is 10-12 tons per acre.

What Are Sources Of Omega-3 For Fish Feed