Previous Post
Canine Cancer, Why It Is Rampant, How to Prevent It, and an Exciting New Strategy for Treating Dogs With Cancer 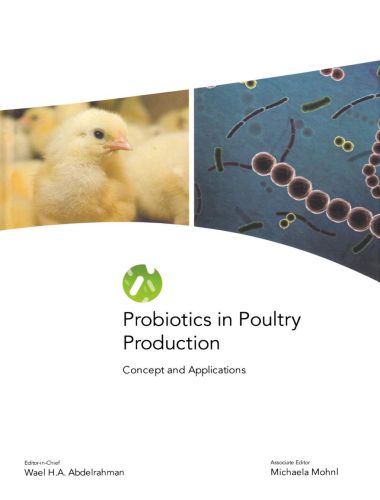 Probiotics are live microbial feed supplements that beneficially affect the host by improving its intestinal microbial balance. The microorganisms come from a whole range of defined strains of probiotics belonging to the groups of lactic acid bacteria, Bacillus spores, and yeasts. Research in nutritional physiology demonstrates the critical importance of a balanced gut microflorain in animal and human physiology. The probiotic concept is concerned with optimizing nutritional intake and digestion by promoting the gut flora perspective. Probiotics act by reducing the feed conversion, resulting in an increase of the daily live weight gain.

The improvement of the growth of an animal is achieved through a natural, physiological way: improving digestion by balancing the gut flora, helping the animal to fulfill its genetic potential. This book discusses probiotics’ mode of action and probiotics’ practical application in poultry production, while explaining the use of probiotics in preventing and fighting poultry diseases, such as Salmonellosis, Necrotic Enteritis, Coccidiosis, bacterial lameness, etc. It will be essential reading for a wide group of readers, including university staff, feed mill companies, poultry producers, veterinarians, and researchers in the field. [Subject: #Animal-Science, #Veterinary-Science, #Poultry-Farming, #Agriculture]

Poultry was domesticated thousands of years ago. The Asian Red Jungle fowl (Gallus gallus) is a wild bird that lives in Southeast Asia. Domestication of this fowl, as well as the turkey, started in prehistoric times as people captured and raised these species for food. Archaeological evidence suggests that the Asian Red Jungle fowl was domesticated in China circa 8,000 years ago. Gradually these captured birds became the modern chicken. In the sixteenth century, domesticated chickens (Gallus gallus domesticus) were introduced into Central America from Europe. Turkeys were domesticated in Mexico and were used by Native Americans, and were then introduced into Europe after the European colonization of Central America. ASA Handbook on Poultry Diseases PDF

Today’s poultry industry is a well-developed business. It began in the late nineteenth century in Europe and America as producers started to realize the importance of poultry meat and egg production. Although the artificial incubation of eggs had been practised in ancient China and Egypt, this method of hatching poultry eggs was not used commercially until the 1870s.
Scientific discoveries and inventions relating to the housing, feeding and breeding of poultry led to the rapid expansion of the industry after the 1930s. Production and consumption of poultry products increased significantly during the Second World War because meat from other livestock was scarce. Since 1945, improved methods of storing and distributing poultry meat and eggs have helped to increase consumption of these foods.