The Biology of Animal Stress

The Biology of Animal Stress: Basic Principles and Implications for Animal Welfare, This book brings together a range 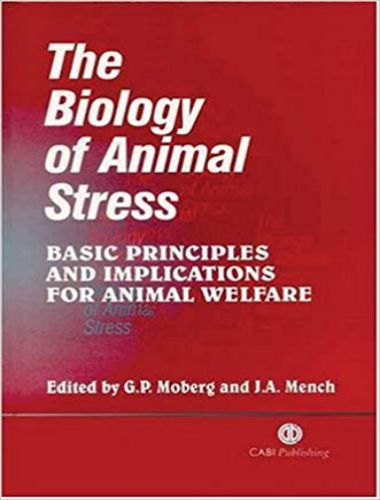 of scientific perspectives from biomedical research on stress and welfare, and assesses new approaches to conceptualizing and alleviating stress. While much of the focus in on conventional farm animals, there is also consideration of fishes, laboratory animals and zoo animals. The 30 contributors include leading authorities from North America, Europe, New Zealand and Australia. This book is invaluable for advanced students and researchers in animal behaviour, animal welfare, animal production, veterinary medicine and applied psychology.

The study of animal welfare continues to struggle with two persistent, interrelated problems: how to define animal welfare, and how to determine which measures should be used to evaluate welfare. One potential indicator of an animal’s welfare is the presence or absence of stress. Considerable effort has been spent to determine if various management practices or conditions induce stress, resulting in the commonly held belief that any situation that results in stress should be avoided or prohibited.

But because animals have evolved sophisticated behavioural and physiological mechanisms to deal with stress, stress jeopardizes the animal’s welfare only if the stress results in some significant biological change that places that animal’s well-being at risk. Unfortunately, many of the classical behavioural and physiological measures used to evaluate stress do not tell us if such meaningful biological changes have occurred, and thus the links between animal welfare and stress are still unclear.

In 1983, a major conference on animal stress was held at the University of California, Davis. By 1998 it seemed timely to get people together to readdress this topic. Although much had been learned in the interim, there were still many controversial and difficult areas, as well as new considerations and approaches to be discussed. The current volume is an outgrowth of that 1998 conference at Davis intended to explore the biology of animal stress and its implications for animal welfare.