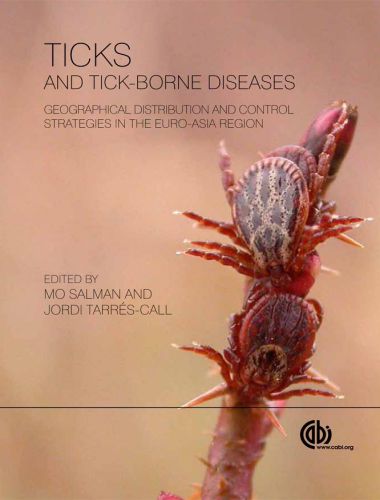 The aim of this monograph is to provide a general overview of the geographical distribution of various tick species which have proven their involvement in the transmission of the pathogens causing animal diseases and zoonoses in Europe, the Middle East and the Mediterranean basin.

As blood-feeding parasites, ticks are able to transmit to their hosts a wide variety of pathogens which may cause tick-borne infections and tick-borne diseases (TBDs) that affect wild and domestic animals, including companion animals. The transmission of pathogens among ticks may occur transovarially, i.e. the pathogen is transmitted via the eggs from females to their offspring, transstadially from larva to nymph and/or from nymph to adult, and Venere ally during copulation from male to female tick.

Vectorial competence is the overall ability of a vector tick species to transmit a pathogen to a range of receptive vertebrate hosts in a given location at a specific time. The TBDs usually are geographically distributed within the range of their vectors. Some of these infections/diseases can give clinical signs which can be severe (in the acute phase) but can also present as subclinical forms (mainly in endemic areas) in animals or humans. Download More: Veterinary Epidemiology – An Introduction

Pests and Vector-borne Diseases in the Livestock Industry